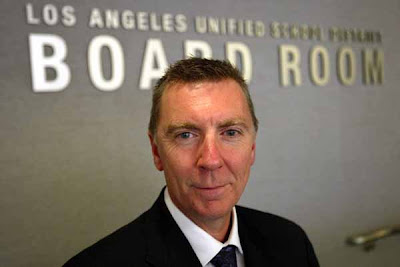 I really wanted to go to Tamar Galatzan's Valley School's Task Force meeting yesterday featuring guest speakers LAUSD Chief Facilities Executive James Sohn and LAUSD Deputy Superintendent John Deasy, but I had a previous engagement already scheduled and couldn't attend. If anyone who attended would like to write up a recap, I'll post it here.
In case you aren't aware, Mr. Deasy will be taking over LAUSD after Mr. Cortines leaves next spring-ish or whenever. If you aren't familiar with John Deasy, our esteemed PTA member, Joseph Mailander, posted some info over at the fine blog, Griffith Park Wayist back in August, which you may find either an interesting visit, or revisit, if you've been paying attention. A quick snippet:

We already know that LAUSD heir-apparent and resume-padder Deasy, who never stays at a job for more than a couple of years, is a teacher-hating chump who's just as eager to sell out the LAUSD's instructors as chronic teacher-bashers Eli Broad andAntonio Villaraigosa are. We know he'll only be around for a couple of years, following his self-serving career arc.

There's lots more; here's the link to read the rest. You know what to do.
Posted by Debbie Lopez at 9:00 AM