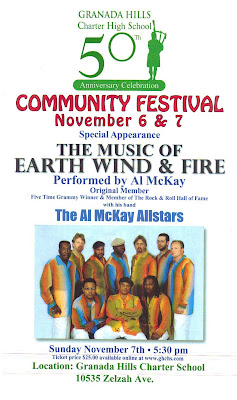 Short bio on Al McKay, from his website:
From 1973, when he first joined the group, up until 1981 when he left to take a well-deserved break from the hectic world of major musical stardom, Al was responsible not only for a lion's share of the group's instantly recognizable sound, but was also writer and co-writer on some of their most enduring hits. Along with founder Maurice White, McKay penned such EWF perennials as "September" and "Singasong," which both became chart-topping signature tracks for the group. But it wasn't only within the band that Al's songwriting shined. As co-writer of The Emotion's smash hit "The Best Of My Love," he contributed one of the most enduring songs of the era, raising the bar on the art of pop craftsmanship in the process.
Here's a taste of the Al McKay All-Stars to get you in the mood to boogie on down: