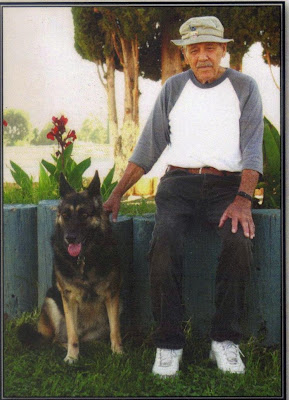 George Hall and his buddy, Jesse 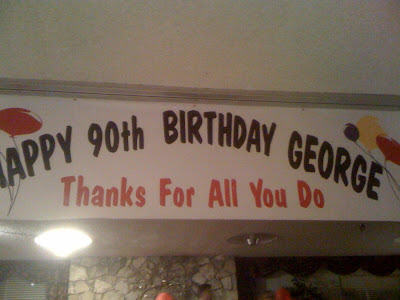 inside First Pres' Lee Hall
Northridge Little League legend George Hall and about 100 of his biggest fans got together last night at a tribute to the 90-year-young birthday boy. The festivities took place inside Lee Hall at First Presbyterian Church in Granada Hills. The hall was packed with former and current Northridge Little League players, board members, coaches, managers and parents. Baseball Attire was the dress code of the evening. I don't know if that meant just sport yer fave team's colors, dress as an actual player, or dress like you were on your way to a little league game. In any event, we had all our satorial bases covered. Ha. 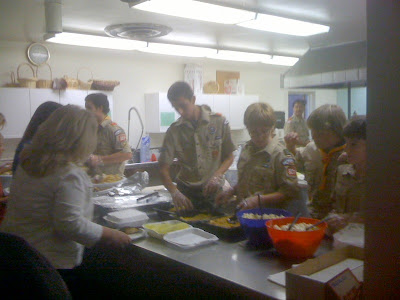 The Boy Scouts came and helped set up the hall as well as grill up the burgers and dogs which were served for dinner. This group of scouts helped build a storage garage for George's mega-cool lawn mower at the Northridge Little League complex. 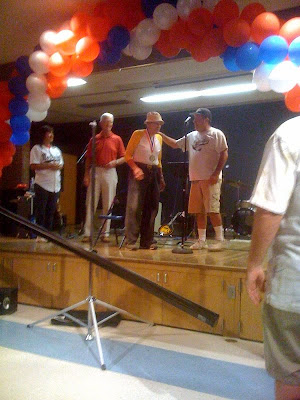 While George may claim to have retired, his work-load has done anything but decline in his later years. Not only does Hall serve on the Board of Directors at Northridge Little League, maintain its fields, and serve as treasurer, he also volunteers as a traveler's aid at LAX once a week, helping men and women who need assistance.
This passion can also be seen in George's work at the Little League, where he has many fond memories of players, parents, and other volunteers. One of his greatest memories is that of the 1994 season, when Northridge made it all the way to the Little League World Series before losing to Venezuela. "I followed them all the way to Williamsport, (Pennsylvania)," said George with a proud grin. "I was behind them the whole way."
George Hall began his volunteer work at Northridge Little League in 1967 as a coach, where he had the honor of managing players who went on to have successful careers in baseball. One such player was Jim Dorsey, who went on to be a major league pitcher from 1980-1985. One would assume that Dorsey must have been the best player in the Little League at the time, but George asserts that that is not the case. "He didn't even make the all-star team," George said with a slight chuckle. "But in college he really worked to improve his game."
In 1978, Northridge Little League renamed its fields the "George W. Hall Fields" in honor of George's service. George himself, however, is very modest about the whole ordeal. "They didn't have to do that, that's not why I volunteer," said George. "But it still was a great honor."
For 40 years, George Hall has been a familiar face at Northridge Little League, much to the pleasure of everyone who has ever known him. "I have a lot of contact with the players and the parents," said George. "I know lots of people that played there years ago, and now they're bringing their kids."
And why has George dedicated so much of his time and energy to helping Northridge Little League? "It's a nice atmosphere, and you're doing something for the community."
And the community is very grateful , George. 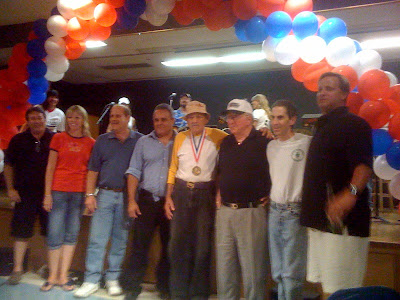 A group photo of players from the 70's.
Pictures were taken with George and groups of people by the decade in which they were involved with NCLL. I was happy to pose with the Class of the 2000's, as I sat on the Northridge Little League board as the President of the Parent's Auxiliary in 2004. I always enjoyed meetings with George; he is always quite the character.
Happy Birthday George! See you in 10 years at your centennial celebration!
Posted by Debbie Lopez at 3:07 PM