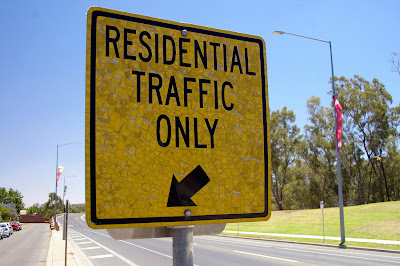 We would suggest an EIR on the project on the basis of analyzing how traffic might differentiate around the surrounding neighborhoods off Wilbur once this striping is in effect and how that might effect the traffic around the schools surrounding Wilbur north of Lassen. We understand many parents of the schools south of Lassen welcome the lane change, and if it enhances the safety of children in the area to do so, then we support it. But if it comes at a cost to the safety of students at other schools, I think we must also take that into thoughtful consideration and planning as well.

UPDATE 2: The road diet was painted in the middle of the night without any community input. The road diet begins south of Chatsworth. Ugh. Our original position stands. Stupid LADOT.
~~~~~~~~~~~~~~~~~
EARLIER THIS WEEK:
An important message from the President of the Northridge West Neighborhood Council (bold emphasis mine):

I was notified today that the City's present striping plan is to reduce the vehicle traffic lanes on Wilbur Avenue down to a one vehicle lane in each direction (1 North bound lane and 1 South bound lane) to allow for a striped bicycle lane in each direction (1 North bound and 1 South bound). See the presently stenciled outline on Wilbur for the exact layout

I've received numerous calls from stakeholders expressing objections to this plan and a desire to keep the two vehicle lanes in each direction (2 North bound lane and 2 South bound lane) which would still allow for bicycle traffic in both directions without bicycle lane striping.

In an effort to ensure that your voice is heard I am asking for your input:

2) Do you want to keep the previous configuration of two vehicle lanes in each direction (2 North bound lane and 2 South bound lane) which would still allow for bicycle traffic in both directions without bicycle lane striping.

For those Stakeholders that have expressed concern over the Crosswalks located @ Superior and Prairie Streets along Wilbur Avenue. I've voiced your concerns that they remain and will keep you posted of the discussions.

I've been asked to attend a meeting with Councilmen Smith's Staff and LADOT to review the present striping plan within the next week. I would like to present your input at this meeting to ensure that your interests and voices are heard. Please contact me if you have any questions. Thank you

PS: *Please Note - I do not have a copy of the City's present stripping plan – it is assumed that the present stenciled outline for stripping is what the City is proposing

~~~~~~~~~~~~
After a random polling of parents, I submitted the following response on our behalf:

On behalf of the Parent Stakeholders of Beckford Ave. Elementary,
We are strongly against eliminating the existing two southbound and two northbound lanes on Wilbur St., which will instead be replaced by striping for only one lane in either direction on that street.
Our elementary school lies just south of Rinaldi and west of Wilbur. What is almost certain to happen is whatHAS happened to the neighborhoods west of Balboa Blvd, south of the 5 freeway..... traffic trying to "cut" through the gridlock would snake through the surrounding streets to short-cut to Rinaldi. For years neighbors had to deal with congested side streets made so by the passing commuters. Finally, the residential area west of Balboa, were given signs forbidding traffic to cut through the neighborhood during drive-time hours. Usually, a neighborhood gets such signs after someone's already been hurt.
And I would hate for any "someone's" to be children.
Looking at a map, the VERY FIRST STREET that you could "short-cut" through to by-pass the guaranteed gridlock that is sure to happen on Wilbur once you're south of Rinaldi is Vanalden. The additional traffic on that street will pass directly by our elementary school. Many, many, many children walk to school on a daily basis, some of the older ones alone, and often parents with one child on each hand and one on their hip trying to walk across crosswalks where there are many inattentive drivers to begin with, looking for parking spots by the school, or fishing out dollar bills from their wallets for lunch money.... it's hard enough in that area during the morning rush hour time without the added burden of more traffic on that street at the same time as the beginning of the school day.
We are shocked and surprised that the city has not considered this in their planning and have not openly discussed this with stakeholders in an open forum.
We would also support a call for an EIR (which stands for "Environmental Impact Report" -DL) before this ill-conceived action is completed. The parents of this school are more than willing to show up by the car loads to convince whomever needs convincing that this is a really, really, bad, bad idea.
Thank you,
Debbie Lopez
President, Beckford Ave. PTA

If you'd like to send your own words to Mr. Johnson, you can go to the Northridge West Neighborhood Council site by clicking here.
Oy, it's always something.
Posted by Debbie Lopez at 8:14 PM

Propose this alternative to the City folks: tell them to put Class 1 bike paths along the Wilbur Wash and Aliso Canyon Wash (just east of Wilbur) which would provide safer and more direct bicycle access to the same community resources and allow Wilbur to remain in its present configuration...

Did the City bring this proposed change to the Northridge West Neighborhood Council for a public presentation and discussion? If not, it certainly should have.

I can confirm that this project was NOT shared with the City's Bicycle Advisory Committee, not even at our last meeting held on August 9, 2010, more than a week after the pavement markings were made. I have requested project information from both the Department of Transportation and the Bureau of Street Services.

As I indicated during our telephone conversation last night, the reduction from four lanes to two appears to be due to the addition of the center turn lane, not just the bicycle lanes. If the traffic is as heavy and the speeds as high as some of the previous respondents have indicated, having a place where left turning vehicles can stack out of harm's way so as not to be rear-ended sounds like it has merit.

You should know that the City may still be considering grade separating Wilbur at the railroad tracks. In 2000, they wrote:
"Wilbur Avenue, south of Rayen Street, terminates at railroad property and is very low on our list of priorities for a grade crossing. In addition, Southern Pacific Railroad has informed the City that it will not approve grade crossings because of liability issues. In order to complete Wilbur Avenue over the railroad tracks, a below grade or above grade separation would have to be constructed. The current traffic counts can not justify the costs of constructing this separation."

So the more traffic, the higher the traffic counts, the sooner the City will be able to justify the connection. I just can't imagine the neighborhood wanting Wilbur to become a major thoroughfare like Corbin and Mason avenues are now that their respective railroad crossings have been opened.

I have spoken with several residents who are concerned about their safety while walking and the safety of children attending Calahan Street and Topeka Drive elementary schools. One suggested eliminating parking on one side (only) of Wilbur for additional usable roadway width.

I believe that the City should do now what it should have done long ago: bring all aspects and options of this project to the community at a public (not a closed-door, private) meeting for its scrutiny, questions, and feedback.

The new configuration on Wilbur - reducing 4 car lanes to 3 - is a called a "road diet." There's quite a bit of data showing that the 3-lane road is safer - for all road users: drivers, passengers, pedestrians and bicyclists.

I think it's great the city is trying to make things safer for kids walking to schools including Calahan Street and Topeka Drive elementary schools.

Joe said: I think it's great the city is trying to make things safer for kids walking to schools including Calahan Street and Topeka Drive elementary schools.

Joe, I wholeheartedly agree. If this lane reduction makes the area safer for children, great. But we have to make sure the change in traffic flow doesn't put any children who attend schools NORTH of Lassen in any danger because of the additional traffic that will use Vanalden as a detour.

If you could personally promise me that any overflow, detouring traffic wanting to shortcut through Vanalden due to this lane narrowing WON'T IN ANY WAY effect any other schools in the area.... I'd feel a lot better. Thanks! :)

@Debbie: Your concern for traffic on Vanalden is very valid. It's important that all our streets are safe. I'd suggest that the best solution would be to design both Wilbur and Vanalden to be calmer and quieter streets.

fyi - LADOT announced today that the new configuration (with center turn lane and bike lanes) will be implemented from Nordhoff to Devonshire (and is approved all the way up to where Wilbur and Tampa interesect - up in Porter Ranch.) See their article here: http://ladotbikeblog.wordpress.com/2010/08/26/ladot-set-to-install-2-miles-of-bike-lanes-on-wilbur-avenue/