It's not too late to fly away 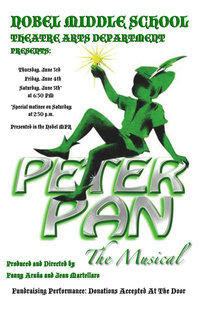 There are two chances left to catch the great Nobel production of Peter Pan!
The last two performances are scheduled for TODAY at 2:30 p.m. & 6:30 p.m. Admission is free, but donations are kindly and gratefully accepted.
This unique show, directed by Fanny Arana & Jean Martellaro, is about a mischievous boy who can fly and magically refuses to grow up.

Peter Pan, a character created by Scottish novelist and playwright J. M. Barrie (1860–1937), spends his never-ending childhood seeking constant adventures on the small island of Neverland as the leader of his gang the Lost Boys, interacting with Indians, fairies and pirates.

Peter Pan, an exciting musical fantasy, brought to life by the talented theater students at Nobel MS, promises to be an adventure not to be missed!

Fly away with Peter Pan on the Nobel stage!