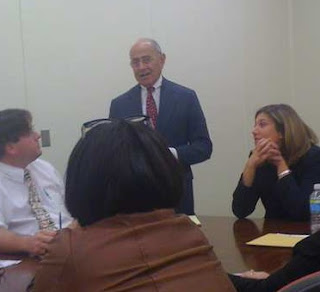 meeting at Tamar's with Mr. Cortines


I don't know quite how, but a couple of weeks ago I somehow managed to achieve what very few parents have the chance to do: attend a very small meeting (less than two dozen people, maybe?) with LAUSD Superintendent Ramon C. Cortines. Now, mind you, it was in the context of an informational meeting with area administrators and a few lucky parents so I was careful to be polite and mind my manners, especially since Mrs. Friedrich was sitting directly across from me. I know I tend to be a little outspoken and get my feathers in a ruffle easily, so I resolved I would go to this meeting as a spectator only, so that I could report back to you parents what went on inside. I brought back-up, because of you know, this post I wrote about Tamar back in July. But it was all good and nothing more than cool glances were exchanged.

My back-up monitored the situation and I mentioned to said back-up that it took Mr. Cortines a mere thirty minutes into his opening statements on how the District might survive the future budget bludgeoning about to happen, to bring up the subject of a parcel tax. I was timing him. I knew that's where they (LAUSD ) would be going next and lo, it has happened:

from Griffith Park Wayist, via the Blogger Currently Known As Mulholland Terrace:

LAUSD's board today voted to put a $100 a year parcel tax on the June 8 ballot. The district has been warring with teachers for fourteen months now, but it will trot them out as exhibit A and say that we're supposed to vote yes to save their jobs.

Parcel taxes are assessed to all property parcels. Whether your home is worth two million dollars or $200K, or whether you own a skyscraper or a storefront, you pay the same tax.

LAUSD voters have assessed themselves parcel taxes five times in the past twelve years, for the district's building campaign.

Tamar Galatzan, seated next to Mr. Cortines in the photo above, was the only school board member to vote against the parcel tax. Way to go Tamar, I will give you mad props for that.

More on the meeting with Mr. Cortines later. I need a nap.

Mad props to photos of Cortines and Tamar from a certain angle.