Can You Say "LOSER"? 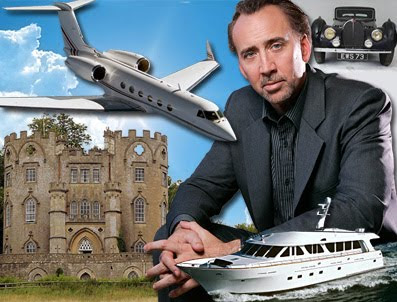 This is what happens when you make bazillions of dollars and are just so obssessed with yourself and your lifestyle.... well, here..... let the Daily Beast spell it all out:

The star is blaming his ex-money manager for his money problems. But insiders say it was Cage who spent his way into big troubles. Jacob Bernstein reports on the star's head-spinning treasure trove: more than a dozen houses, two Bahamian islands, dinosaur skulls, shrunken heads, the shah of Iran's Lamborghini (and more). Fun while it lasted:

Even by Bel Air standards, the Christmas party in the tent at Nicolas Cage’s mansion was a major to-do. The pool was covered up. Blocks of ice were brought in and carved into a buffet table, from which an extravagant array of shellfish was served. A production crew blew fake snow. There were enormous nutcracker men, 8- to 10-feet-tall, out by the gate in front of the house. Lighting specialists came by and illuminated Cage’s favorite cars, which sat on display in the driveway. Guests at the December 2003 event included Hugh Hefner and Jay Leno, who later called it the greatest Christmas party he’d ever been to.

Whether the actor proves his former money manager is at fault remains to be seen, but conversations with several sources close to Cage reveal a person whose financial problems stemmed at least in part from his own profligate spending. As they tell it, Cage’s appetite was extreme even for Hollywood, with a decade-plus shopping spree that saw him snapping up houses, motorcycles, a jet, yachts, vintage and new cars, expensive watches, meteorites, dinosaur skulls, an enormous pet collection, massive amounts of jewelry for the women in his life, group vacations for his entire entourage, and on and on and on. “He lived like a sheik,” says one person who’s known him for several years. “Spent money like it was water,” says another.

You can read the rest of the story, as well as see a photo gallery of all the weird crap this nut spent his money on by clicking here.

Email ThisBlogThis!Share to TwitterShare to FacebookShare to Pinterest
Labels: crazy