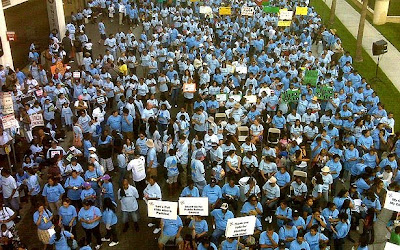 pro-choice protesters outside lausd board of education meeting


I'm still trying to get a clear understanding of all the issues involved here before I start spoutin' off with opinions and such.

I think in theory it may be a good thing, but in practical application ... well, let's just say I'm feeling a disturbance in my Force. And that's rarely a good thing.

In the mean time, wrap yer minds around this:


Finally, after 30 years of failure to achieve a record of success and a can-do classroom culture, LAUSD surrendered Tuesday and took the leap toward real reform. -- RonKayeLA


The Los Angeles Board of Education voted today to open up 250 schools, including 50 new multimillion-dollar campuses, to outside charter operators and others. The move came after a nearly four-hour debate on a 6-1 vote, with board member Marguerite Poindexter LaMotte opposing.

Under the proposal by board member Yolie Flores Aguilar, nonprofit charter groups and the mayor's group that oversees 11 schools could compete for the chance to run these schools. Ultimately, it will be up to Supt. Ramon C. Cortines to select the winning bid for these campuses. -- Los Angeles Times

In response to that criticism, Aguilar said at the beginning of the meeting that the specific operators were being taken out of the resolution to ensure the process was open to other operators.

LAUSD Superintendent Ramon Cortines said the bidding would be carefully monitored, and operators would only be chosen after a thorough vetting process to ensure they can bolster student achievement. -- Daily News


While this is a significant victory for the Mayor, it's a devastating setback to the UTLA Teachers Union. UTLA President AJ Duffy has called the plan "the privatization of public education." -- MayorSam

As we say around our house whenever the Mayor is making noise about taking over schools, "he can't even run the City, for God's sake."