If there isn't enough over at LAUSD to worry about, Ray Cortines is in a kerfluffle over this pic: 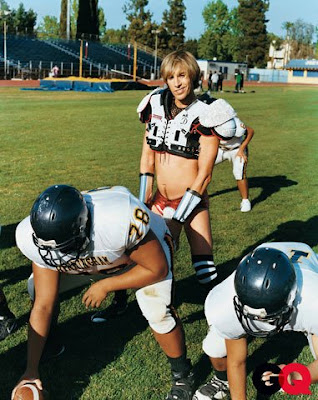 Now, I don't know what Ramon Cortines is freaking out about when there are a bazillion more pressing issues resting atop his desk, I'm sure, but here he is spouting off in the Daily News:

While parental consent was granted for the April 16 photo shoot, LAUSD Schools chief Ramon Cortines said the forms lacked "specificity" about the nature of the photos.

Cortines said "appropriate personnel action" would be taken against Birmingham's principal, Marsha Coates, and athletic director, Richard Prizant. But he said personnel matters were confidential and he could not specify the disciplinary actions.

"Rules were broken. The principal is ultimately responsible, but I also hold accountable the athletic director, who is also the school's filming coordinator and was present when the pictures were taken," Cortines said.

"I also want parents to know that this district will allow no one to take advantage of our students."

District officials said they did not know if Birmingham students will also appear in the "Bruno" film, due out July 10.

Dude, seriously... chill. Honestly, it looks like you're making the administrators at Birmingham your sacrificial lambs in an attempt to veer attention away from whatever is going on (or not going on, in your case) at LAUSD and this kind of penny-ante bullcrap is wearing thin. FOCUS RAMON, FOCUS!

I've posted the worst (from what I've seen) of the photo shoot above. The rest of the photos are pretty benign. (Click here to see a photo gallery of the GQ shoot). As of this writing, I don't believe any parents or students involved have complained. I would suggest to Mr. Cortines that he not make moutains out of molehills and instead FOCUS ON THE TASK AT HAND.

We are losing teachers; we have lost teachers; we may lose more... and LAUSD is a quickly sinking ship. Could ya maybe start acting like it, Mr. Cortines?
Posted by Debbie Lopez at 1:54 PM