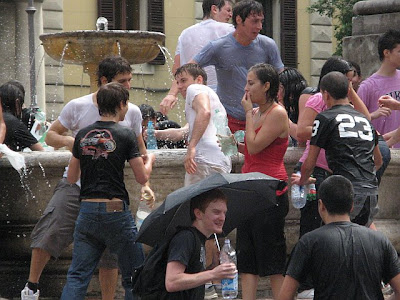 it's all fun and games until someone gets hurt.... and yes, I know this isn't really Granada...

"Dooood! There was a huge water fight at lunch! Dean is gonna come on PA at 2:05 to talk about it."

According to my sources, this is how it went down:

During lunch time in the lunch area, someone threw a large water balloon up in the air, it hit the ceiling, popped and drenched everyone underneath it. Then all watery hell broke loose.

Water balloons by the dozens were thrown, water bottles (some filled, some half filled) were thrown up in the air and for THE EPIC WIN, a kid pulled out a SUPER SOAKER!!! OMG!

Now, while I do not condone the throwing of plastic bottles filled with water (it's all fun and games until someone gets hurt ... and there were people hurt by those bottles) but I gotta give mad props to the Super Soaker Dude for the effort.

That fight was quelled, but moments later a Water Fight Mosh Pit estimated at around 200 students broke out in the hallway. Super Soaker dude was at it again, and this time when Administrators arrived to break up that water fight, a large bottle of RED GATORADE (the little details matter in the telling of this story) was thrown up in the air and water bottles allegedly hit an Administrator, Mr. Pleasant. We thinks on purpose.

It's like I always say kids: Don't do the crime if you can't do the time.

This message was being sent while Mr. Bauer was giving his annoucement over the PA.

Kids.... really.... you better behave or I'ma hafta talk to your Moms and Pops.

Be good my Beckford GHCHS students, I don't want to see anyone get into any trouble...

If you wanna have a water fight.... COME TO FAMILY FUN DAY MAY 30!!! WATER BALLOOOOOON TOSSSS!!!

This one's for you G-House:

FREAKING DRAMA! Its really not that big of a deal. It was WATER. And as for the water bottles getting thrown, it hurts for like a couple hours, not a big deal!

The Assault on Pleasant was bad ok but o well its not like hes dying...

IT WAS ALL OUTTA PURE FUN... If you ask anyone that was in the fight they would tell you GREATEST DAY IN GHCHS HISTORY.

WE all had FUN Although GHCHS doesn't normally like this.. its not a big deal.

At the end of the fight Security was laughing (all but pleasent) they all had smiles on their faces.

Oh and GHCHS BRINGING LAPD tomorrow is OVER DRAMATIC BEYOND BELIEF...

too bad pleasant got hit, but it was all in good fun

it wasn't a "brawl", nobody got hurt

The piece was written tongue-in-cheek, note the quotations marks around the word "incident", meaning, it wasn't even one.

Now get back to english class, slacker, ur reading comprehension sucks.

Granada is fuckin CRAZY.
they need to get over it!

the students were just having fun!

and they shouldnt take the nutrition away if only a few people did it!

it was a water fight.
jesus christ, the LAPD doesn't need to get involved.
really, this is so stupid, people shouldnt get punished for having some good-natured fun.
we're kids. let us do our thing. leave us alone mr. pleasent.

ok, THIS IS REDICULOUS! It's too hot at schools these days and WATER CAN'T KILL YOU!!! Jeez! Everyone one was making a big deal out of it and now Kids dont have nutrition! Pleasant got hit, it's a shame, but you dont see the kids that got hit complaining about it. People are saying that it was the best day in GHCHS history. If it was up to the kids, stuff like the water fight would happen EVERY DAY !!! :D take THAT society(:

this was an Amazing day!
this makes school fun!

As a GHCHS grandparent, I'm so very very glad the kids brought ballons onto campus instead of GUNS!!!!

the only thing that was hurt that day was Mr pleasent's dignity. this school can be a real bitch sometimes, i mean, it was a watter fight and they brought in the freikin LAPD? WTF?!

anonymous...
that picture is not even our school, and wow it was water i didnt even hear anyone getting hurt other than pleasant besides imnot the only one who hasn't heard of hurt students. Oh people were just having fun. i arrived late at the scence i saw when mr.pleasant got hit. ihave to admite i cheered and i do understand that IT IS bad but hey he caused it himself by the way he treats us. if he were nicer well if ALL the mean administrators were nicer we would respect them more...Nobody's happy at granda HILLS CHARTER school anyway too strict...

It was really fun actually I was remembering it. It really was not a big deal, specially compared to everything else that has happened since. Mr. Pleasant needs to loosen up. He should be used to it by now. lol

haha our school is insane. i fuckin love granada, but i also hate it because ever since a couple of incidents of people getting too wild ( for instance, just last week when a hairy senior put on a pair of red womans booty shorts and decided to do a flip in front of mr. pleasant at the pep rally) the security is getting tighter, and we're being watched even more x.x god people...save the craziness for after school!!!!

It sure is hella strict over here. It's only water, it wasn't a fist fight or anything… I'm currently a freshman at GHCHS, so there'll still be some seniors around who were lucky enough to have witnessed this Day. It's so fucking boring sometimes, and if a little fun like this can get you expelled then I'm speechless.

The LAUSD has their own police force,so why did GHHS administration seek involvement of the LAPD in response to the May 7, 2009 water fight?

The parents and guardians of GHHS student body have never been provided with a complete accounting of the LAPD's involvement at GHHS.

Only four months after the waterfight GHHS student and football team player Koziel came home from school one afternoon, calmly went into the bathroom and shot himself in the head.

The suicide has never been officialy explained, but Facebook entries by fellow students and football team members indicate they believe they know why Koziel killed himself.

13 months after the waterfight, newly graduated GHHS student and marching band member Champommier is shot and killed by plainclothes undercover narcs in the parking lot of a Studio City shopping center.

We don't know if the collaboration of LAPD with GHHS Administration was somehow a factor in the deaths of these two GHHS students. The time is long overdue to find out.

Is there any person with the self-respect, dignity and courage to demand answers to very basic questions?

Did the GHHS invitation to LAPD in May 2009 link to any further or ongoing activity involving the campus or any member(s) of the student body and LAPD or another law enforcement agency?

Did Principal Brauer or another GHHS administrator allow anyone from LAPD or another law enforcement agency to access any of the student files without properly reporting the access?

The student files are confidential and access is strictly controlled under State and Federal codes.

The Administration maintains custody of the student files and must protect their confidentiality.

Most people outside of the education field don't fully understand the importance of restricting access to the student file - because they have never seen a student file, not even their own.

The file contains all of the report cards and other routine quantitative data. If a student attended L.A. public schools from kindergarten/First grade all the way to High School graduation - then their file contains all 12 years of records.

The student file may also contain subjective qualitative reporting from teachers. A written retelling of any personal fears, desires, etc. which a pupil confided to a teacher can be placed into the file. Any event or behavior which isn't related to subject grade, including the teachers analysis of the behavior, may be placed into the file.

This information is intended specifically to provide future teachers with important insight into the individual student to help them facilitate the student's development over the long term.

Access must be strictly limited to prevent the misuse of confidential information. It can be used by non-educators to unfairly target and exploit an individual.

Police could misuse the information to recruit and manipulate students as informants and to target others for inducement or entrapment into illegal behavior for which they get arrested and prosecuted.

If there was any improper access allowed to student files at GHHS, parents and alumni need to find out and those responsible disciplined.

The waterfight cannot be noted as one of the greatest days in GHHS history unless those involved return and wash away the shroud of secrecy concealing the aftermath.