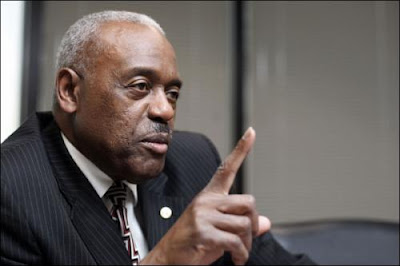 Okay, you know how sometimes you go to a scary movie, and the serial killer is creeping up behind his next unsuspecting victim and you start screamin' at the screen, RUN GIRL, HE'S GONNA GET YOU RUUUUUUN! You just can't help yourself. Well, while reading George B. Sánchez's interview of LAUSD Superintendant David L. Brewer in the Daily News, the voices inside of my head started going off double-time. I know, it's scary. [Bracketed smart-ass comments in bold are mine]

Daily News: Are you going to survive as superintendent?

I serve at the pleasure of the board. I stay focused on the mission of educating children, solving this budget crisis.

I have been in a cascade of crises since I arrived. I inherited a payroll fiasco the first month I got here. Solved that. [Solved that? Dude, you people had to pay the people who sold you that crap payroll system to fix it, which took them, oh what, 20 MONTHS! And then you settle with the company for damages equally only maybe HALF of what it cost to fix it, not to mention the millions more it cost you in collateral damage. You solved nothin'.]

A month after I get that solved, we had budget crisis No. 1, last year's budget. I balanced that budget, but now I'm balancing a budget in the worst budget crisis. [I don't know, I always thought balancing a budget meant you were able to have money to pay for what you need within your financial means. When schools run out of paper mid-year, that ain't balancing crap. It's making schools and children and teachers do without.]

DN: Critics would say by hiring Ramon Cortines at $250,000 as deputy superintendent, you've just brought on another high-paid administrator to do your job. [Uh, yeah for reals. Who is really running things? Hmmm?]

DB: No. Let's put this in perspective. L.A. Unified School District is the second-largest school district in the nation. There are other superintendents and deputy superintendents that make more money than me and Ray Cortines. And they are (in) smaller districts. This (district's budget) is larger than (budgets of) seven states, including Alaska. This school district has launched the largest school-construction program in the history of the United States.


DN: Putting the politics aside and knowing what you were getting into, where did you think you'd be two years into your job? Are you there?

DB: Well, I don't think I could have predicted two things: the budget crisis and the payroll problem. [You didn't see the budget crisis coming two years ago? Really? Cause I've been screamin' about it for two years. I've been hollerin' that we need to store our financial nuts for this harsh winter. More cuts are coming my friends. More horrible, horrible cuts. My head is going to explode kthxbai]

They were outside of my control, but they consumed so much of our time in the past two years.


DN: But school board member Yolie Flores Aguilar has said she feels you haven't moved fast enough in making progress on dropout rates, engaging parents and improving teacher quality. There is a clear frustration from the folks you have to answer to. [Um, yeah. Where's the love David Brewer? You should be out visiting every school in the district, meeting with teachers and administrators and engaging parents in dialogue about their concerns.]

DB: Let's talk about fast, highest gains among the major school districts in California ... The state of California wants us to be at 800 API (on the Academic Performance Index) by 2014. At that rate of gains (21 points per year), we will be there by 2013. That's fast - especially for a school district this large. [This begs the question - at such a meteoric rise in the API scores, on whose backs do these gains come and at what cost?]

I talk to other superintendents across the country. ... Let me gauge myself. Am I making the kind of progress I should, given that I've only been here two years and all the circumstances? The answer was not only yes, but hell yes. [OH HELL TO THE NOES!]

The average superintendent will tell you it takes six to eight years to make substantive changes in any system, especially one like this one, which by all accounts was dysfunctional.


DN: Given that you come from the Navy, as a retired admiral with no education-management background, was the school board taking a chance hiring you?

DB: I had an education background because I was the vice chief of naval education training, which means I was responsible for the education and training of 300,000 sailors. I had a 25,000-person work force.


DN: But do you think you would have handled these challenges differently had you come from a kindergarten- through-12th-grade education- management background?

DB: I think what has happened in this country is what school boards and school districts are looking for are people with strong leadership skills. [But it helps if you are familiar and intimate with the as many of the inner workings of such a huge friggin' district such as ours. Surely, leadership could have been found within the district]

That's what I bring to the table. You surround yourself with the talent you need to manage the things you don't know. No leader is an expert in every aspect of a school district.

My best tour of duty with the United States Navy was as an engineering officer on a ship. That's when I began to realize I did not have to be technically as good as the people that worked for me, but I did have to have the best leadership and management skills to do the job.

As Henry Ford said, you hire people to do that. What you have to do is manage this system. I can tell you I am an expert in fixing the dysfunction in this school district, which facilitated growth. [w...t....f...??? Dude, you're steering a sinking ship and it ain't gettin' any better any time soon]

This school district did not have the international baccalaureate degree program, one of the most rigorous academic programs in the world. There were 82 IB programs in the state of California, zero in LAUSD. That was a crime, so I brought in nine of those programs.

I signed a historic agreement with the Chamber of Commerce. At Cleveland High School, Disney comes in about once a week to work with the kids in graphic arts and illustration. When you create that environment, you retain more students, you invigorate them, and you teach them there is a relationship between what they're doing and the workplace.

These are the visionary things I brought to the table.


DN: Given all the achievements and programs you've implemented, then what's going on here? Is this about politics or your performance?

DB: It's not about kids. [Kids you never get out to visit. At least not our kids]


DN: Do you think Mayor Antonio Villaraigosa, former Mayor Richard Riordan and Eli Broad are conspiring to remove you? [former Mayor Riordan already is on record with his feelings about wanting Brewer out -- he wants him O-U-T. The current Mayor is too much of a wuss to say anything at all about it]

DB: I don't know. I saw that in the paper. They say that they are not. I have no idea. [Cue the O'Jays: "They smile in your face/All the time they wanna take your place/Backstabbers!"]


DN: But when you applied for the job, you knew the mayor was going to be involved in education in one form or another. Was that a concern of yours?

DB: No. We work with the mayor. Another thing I created was the innovation division, what we call iDesignschools. We worked diligently with the mayor to form that partnership. I went to Roosevelt High School and encouraged the parents and teachers to join the mayor's partnership.

Their (the partnership's)superintendent, Angela Bass, happens to be a personal friend of mine. I can't imagine what the mayor is upset about because I worked with him to get those schools. [Aw, it's okay Admiral, I think the mayor is a tool, too.]


DN: Do you want to finish your four-year contract?

DB: Sure, I would love to finish the mission. [And I'd love for their to be brand new computers in our computer lab. And I'd love it if the wood shingles surrounding our children's classrooms, auditorium and office buildings were replaced with something fire retardant. And I would love not having to scramble for every last scrap of funding because we're all like sharks in the fundraising waters fighting over the same bucket of chum as everyone else. I would love to live in that world. And then reality set in.....]

Posted by Beckford Parents at 9:45 AM