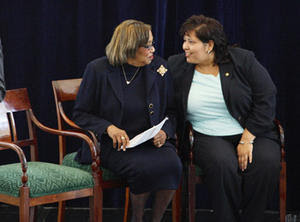 Poor ineffective, beleagered L.A. Unified School District Supt. David L. Brewer has staved off an attempt to oust him as the head of the school district, headed in large part by Mayor Antonio Villaraigosa crony and Board of Education President Monica Garcia. So much drama! So much intrigue! It's like Dynasty, but Hobo Style, because LAUSD is broke as a joke. Hobo Fight Club. In heels.

The Los Angeles Times gives us the behind-the-scenes chisme of the power struggle being currently waged within LAUSD.

Board of Education President Monica Garcia attempted to lead an effort to dislodge Brewer but it began to fall apart Monday when she failed to persuade a key board member to show up at the meeting.

Garcia and her allies were reluctant to act against Brewer, who is black, without LaMotte, the board's only African American member.

Garcia tried to reach LaMotte in person and even dashed to Union Station in an attempt to catch her before she boarded a 2 p.m. train Monday, an aide to Garcia said. The panting aide, running in high heels ahead of Garcia, reached the platform just as the train doors closed.

In an e-mail, LaMotte said she later received a "dastardly request" to return Monday "via train or chauffeured car."

The request came from Garcia, who also called other board members to alert them of a discussion about the superintendent's future. Board member Richard Vladovic, who is sick with pneumonia, struggled out of bed to make the meeting at Garcia's behest.

LaMotte judged the entire last-minute notification as questionable. She has long been suspicious of Mayor Antonio Villaraigosa and his attempts to influence the school district through his alliance with Garcia and other board members he helped to elect.

"The futile attempt to have me do an immediate turnaround upon my arrival here was a disingenuous and unconscionable coverup to exclude me from this strategically and externally motivated plan," LaMotte wrote.

LaMotte also apparently worked the phones. By 6:30 p.m. Monday, a rhetorical firestorm was erupting. One principal reported that Rep. Maxine Waters (D-Los Angeles) asked her "to spread the word that there is a 'surprise' motion to be made tomorrow to ask Supt. Brewer to step down" while LaMotte was out of town.

In a widely distributed e-mail, the principal also talked of a campaign to flood board members and the mayor with e-mails and calls of protest.

Waters did not respond to a request for an interview.

Not all board members were thrilled by the unfolding events.

"I was distressed by the process," said board member Marlene Canter. "There are seven board members, and a conversation of this magnitude needed to take place with all board members" and not, she added, in such a hasty manner.

On Monday, Garcia tried to do what her office characterized as "outreach to civic leaders" to alert them of "an important issue" in the school district. Those on the list of more than 30 calls included elected officials and business leaders, including key members of the African American community.

Using a script approved by the district's lawyer, she told them that "there was going to be a discussion about the future of the district and the role of the superintendent," according to Garcia's office. Garcia's phone-banking began about 2 p.m., after aides said she had spoken with Brewer.

You can read the rest of the gory details here.

Posted by Beckford Parents at 7:55 PM