This Monday Night!
FREE Tickets! (while they last) 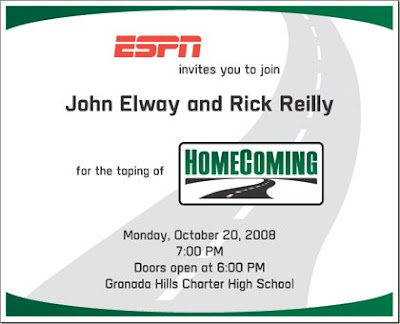 Homecoming is a new ESPN program, hosted by ten time Sportswriter of the Year Rick Reilly, that challenges the old adage "You can't go home again." Is it nature or nurture? Is all talent simply genetic or do our gifts grow out of the people and places we call 'home'? After all, home is where the heart is and heart is the intangible that separates a good athlete from a legend.

John Elway, the man, wasn't born in Granada Hills, California, but John Elway, the Hall of Famer was. Born in Port Angeles, Washingon, Elway was never in one place long enough to let his roots take hold. His father, John Albert Elway, had to go where he could find work and that work was football.

In 1978, Elway's dad took a head coaching job at Cal-State-Northridge, moving his family to Southern California. There, John A. Elway, noticing his son's natural ability from an early age, made it his mission to find a place that would unlock his son's ultimate potential. That place was Granada Hills Charter High School, where Elway grew into the most sought after high school football player in the country; and it is the location of the premiere episode of Homecoming.

It is where the Elway legend took shape, as told by John himself, surrounded by his family, friends, former coaches, and teammates where it all began. It is in every sense of the word, to be the greatest Homecoming.


Tickets to Monday evening's taping are FREE and available for pick up in the Main Office and the Activities Office during normal school hours through Friday. They will also be available Saturday morning from 8:00 am to 12:30 pm in the Activities Office. Limited tickets will be available at the door Monday evening and such admittance will be granted on a first come, first serve basis. Please direct any questions to 818-360-2361, ext 339.

Posted by Beckford Parents at 1:23 PM