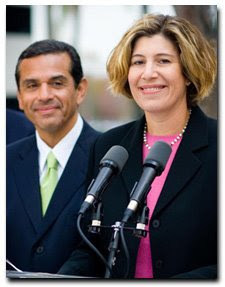 Of all the changes that have occurred in the physical appearance of Los Angeles during the past decade, there may be none as profound as the proliferation of new schools. During the past few years, the LAUSD's Facilities Division has overseen the completion of 72 new schools, with another 60
scheduled to be finished by 2012.

One can argue over the architectural merits of some of these structures, but there can be no denying that they have brought the District ever-closer to its goal of putting all students on a traditional calendar in a neighborhood school. On July 31, the Board of Education unanimously approved placing another bond before the voters, but this one has more money -- $7 billion and a broader agenda than the four previous in this cycle.

The many items denoted in the bond package, including career education and early childhood education, are worth funding, yet I voted in favor with considerable reluctance.

I remain convinced that the system of financing school construction through bonds though necessary given the anti-tax times in which we live contains an inherent inequity. It is not fair to ask homeowners to be the sole source of support for these measures, especially in the difficult financial times that we are facing. But until the California Legislature allows school districts other ways to raise funds, there is no viable alternative to occasional bond measures. And this is not a case of frivolous spending many of our schools are in desperate need of structural improvements, new technology, new plumbing, updated fire systems, and so on. I have visited many schools in my board district and have seen firsthand examples of scarce resources and shocking levels of disrepair.

Should the bond be approved in November, I will closely monitor the distribution of projects. One of the commitments I received from the Superintendent and the head of Facilities prior to the vote on the bond was that the Valley would be given its fair share. That's a promise that I will demand the District keep.

If you would like to receive Ms. Galatzan's newsletter, please contact denise dot campos at lausd dot net

Posted by Beckford Parents at 8:38 PM